Straight line winds and heavy rains have taken their toll: the oats are bent over nearly to the ground and wedged into one another. I believe this is called lodging and you can see it in the photo. Around the edge of the fields, especially near the road, Minnesota’s newly identified invasive pest, wild parsnip has been giving me plenty to do just to keep it in check. You don’t want to mess with this stuff: if you get the juice on your skin and it gets exposed to sunlight you get a nasty burn. Ouch.

But things are coming along: the oats should be ready to harvest in a week or so, there is progress on plans for a farm office and repairs to the old barn and I’ve cleared many of the trees from along the creek where I hope to put a crossing so we don’t have to go the long way round from the barn to the fields.

The whole thing is overwhelming and exhilarating. I’m sure grateful for good friends who are helping in all kinds of ways. 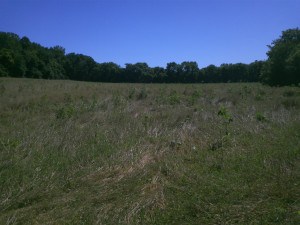 Strong winds and rains have ‘lodged’ the oats.

Greece and US Debts

I read, the other day, a comment about the situation in Greece that got me thinking. The comment ran something like “The ordinary citizens of Greece are wondering why after going to work and paying their taxes all their lives suddenly they’re being asked to accept brutal ‘austerity’ measures and to sell off national assets in order to qualify for a European ‘bailout'”. That seems a sensible question to me. Is it, perhaps, parallel to the question Americans could be asking along the lines of “After working and paying my taxes all my life, why am I being asked to sacrifice my retirement or healthcare for my parents?” in both cases, it seems to me, there is a disconnect between the demands made of workers/taxpayers and the responsibility for the fiscal problems that prompt those demands.

I suppose one could argue that fiscal problems result from the electoral choices of the voters both in Greece and the USA, that is, that the voters elected the politicians who made the mess. Certainly there are those that would say “Those lousy tax and spend Democrats ran us into debt” (deftly ignoring the Bush Tax Cuts, his two unfunded wars and other inconvenient data). But I wonder if it’s time to go beyond this simple trope.

You can’t have debt without two participants: the borrower and the lender. As the media hypes ‘Greek default’ one is tempted to think of deadbeat borrowers and assume it’s all their fault.

But wait a minute. What about the other side of the transaction? If we agree that mortgage originators in the US who sold liar’s loans to folks who really didn’t qualify were partly responsible for the 2008 crash, and by extension the banks who encouraged them to do so, then the situation in Greece – and the US – may not be so simple.

In this moment when bank profits and bonuses are beyond belief (and greater than before the 2008 crash) the (well-mananged?) perception is of  noble creditors and lousy debtors. I am not so sure the creditors are all that noble. TARP may well have been an institutionalization of moral hazard: why be responsible about making loans when you know the federal government will bail you out no matter what you do?

The most recent news I saw suggested that the Greek Parliament had voted to accept the ‘austerity’ measures demanded by the banks. You can read about them here. I wonder how (if) that will play with ordinary citizens. And I wonder what lessons we might draw if, as Jon Stewart noted, each Greek citizen owes $44,000 but each American owes $45,000.

Oats and Other Progress

The oats are up and doing beautifully, electricity is in and the well is working. Progress down on the farm!

With help from neighbors, oats were planted in most of the tillable fields along with alfalfa and mixed grasses. This is a first step towards organic transition: no treated seeds, no GM anything, no prohibited chemicals. They’re doing nicely as you can see in the photo. 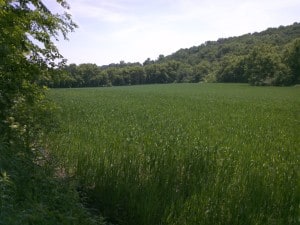 All together, there are about 24 acres in oats just now. After the oats and straw are harvested – likely late July or early August – the alfalfa should take off. At least, that’s the hope!

I never imagined I’d get so excited seeing oats grow! I’m thrilled. Go figger. Here’s an image of the oats, up close and personal so you can see the seeds developing. 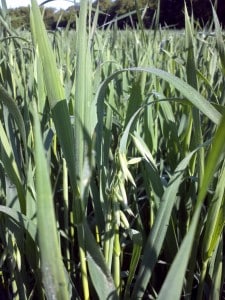 Maybe I’ll keep a bushel or two and see if I can make oatmeal, rolled oats or skirlie. But that’s for later. At the moment I’ve got more immediate jobs to do: gotta get the red barn solid, cleaned up and re-painted. Got to get a farm office sorted (with a working bathroom, I hope) and lots of thinking about the overall site plan. Where should I put a strawberry patch, raspberries, hops, asparagus or other perennials? What should I do about a crossing over the creek? And what about the gazillion boxelders and tons of buckthorn? So much to ponder. 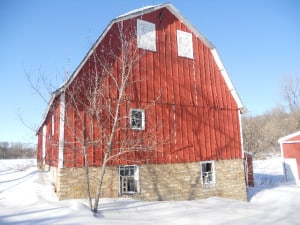 The picturesque Sogn Valley near Cannon Falls, Minnesota has seduced me. With no farming experience but a passion for sustainable agriculture we went and bought a 55 acre farm in this lovely area. The farm includes 25-30 acres of rich bottomland with a small creek running through it, the balance is south-facing woodland with old oaks, younger birches and, we’re told, lots of morel mushrooms. The fields have been rented for conventional corn and beans but this year I’m planting oats and alfalfa to begin organic transition. There are two barns but no dwelling at present, though there is one building right with the property.

We bought this land because I think it has enormous potential: the soil is excellent, it is within an hour of a major market, it is near a transport corridor (Highway 52 runs from the Twin Cities to Rochester) and not far from a lively college town, Northfield, the hillside offers excellent solar resource in addition to its historic oak savannah ecology. But how do I realize this potential? I’m not a farmer, I’m a musician and scholar (ethnomusicolgy – go figger . . .). My dream is to find some folks who want to help creating a thriving, sustainable, resilient farm on this land integrating the fields, stream, woods and buildings. I don’t know what the best crop choices will be, but I suspect that a variety of products will yield the best results: some critters grazing, small fruits or berries, wood for heat, small grains, CSA or market vegetables, maybe hops for the burgeoning local brewing scene. I’m expecting some serious trial and error!

We’ve only owned the land a few weeks so I’m overwhelmed with ideas and projects. But in the end I hope this will be home to a farm family of some sort that will thrive and, in time, take ownership of all or part of the enterprise. There are many, many steps between here and there but that’s my dream. I wonder if there is someone out there who’d like to play in this sandbox . . .